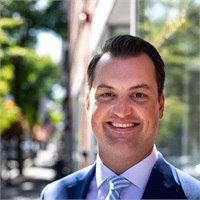 Michael has been in the insurance industry since 2006 and became a member of the John Andrade Insurance team in 2009. He is licensed in Property, Casualty, Life and Health and recently earned his Certified Insurance Counselor (CIC) designation.

He loves anything to do with Boston sports and family! He is the middle child of three boys Matt, Mike and Mark! He played football while he attended The College of the Holy Cross where he received his BA in Economics.

Michael lives in Bristol with his wife Keri and dog May Lei. Michael and Keri have two daughter's, Penelope and Charlotte. He has been lucky enough to have traveled around the globe but has firm family roots here and calls the East Bay home.