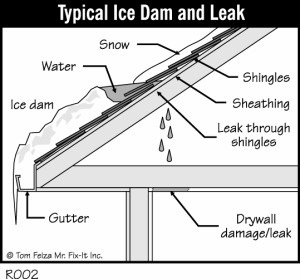 Ice Dams are common in New England and are especially common with heavy accumulation of snow as we saw in Winter 2015. Ice Dams are basically snow and ice buildup on roofs that creates a situation where water backs in behind flashing on roofs causing severe water damage to the interior of homes and businesses.

Many people try to prevent an Ice Dam by removing the snow from the roof. Note by doing so, you could create more roof damage if the snow is not removed properly.

If you choose to alleviate the snow yourself, it is best to do it from the ground with a plastic rake made specifically to remove snow while not damaging the roof shingles. A good approach is to actually take only a portion of the snow away while leaving about an inch on the shingles to avoid damaging the shingles and thus allow the remaining snow to melt on its own with the weather.

If you decide to hire a contractor to remove the snow/ice, choose a roofer who has experience in the removal of snow on roofs as a part of their operation. They will be in a position to repair any damage that they may have caused unintentionally.  Request a certificate of insurance from the any roofing contractor before you hire them to ensure they carry proper liability insurance.

Although Winter 2016 has produced much less snow, we’re not out of the woods yet.